The lives behind the label

‘Made in Bangladesh’ has become an instantly recognizable symbol. But what springs to mind when you read these words in the collar of your H&M shirt?

The media in the West tends to present a grim, one-dimensional picture of garment factories: women crouched over sewing machines working long hours for low pay for unscrupulous employers whose negligence leads to disasters such as the 2013 Rana Plaza collapse, which killed 1,135 people and left thousands more injured.

That is part of the truth, but it is not the whole story. The rise of factory work has also brought radical changes and new freedoms, creating new social classes and shaking up habits and lifestyles.

We wanted to hear about some of these changes, directly from the factory workers who are living through this period of rapid industrialization.

Through a partnership with the Awaj Foundation, one of the Bangladesh’s largest trade unions, we ran storytelling workshops with 80 garment workers in five different neighbourhoods of Dhaka. 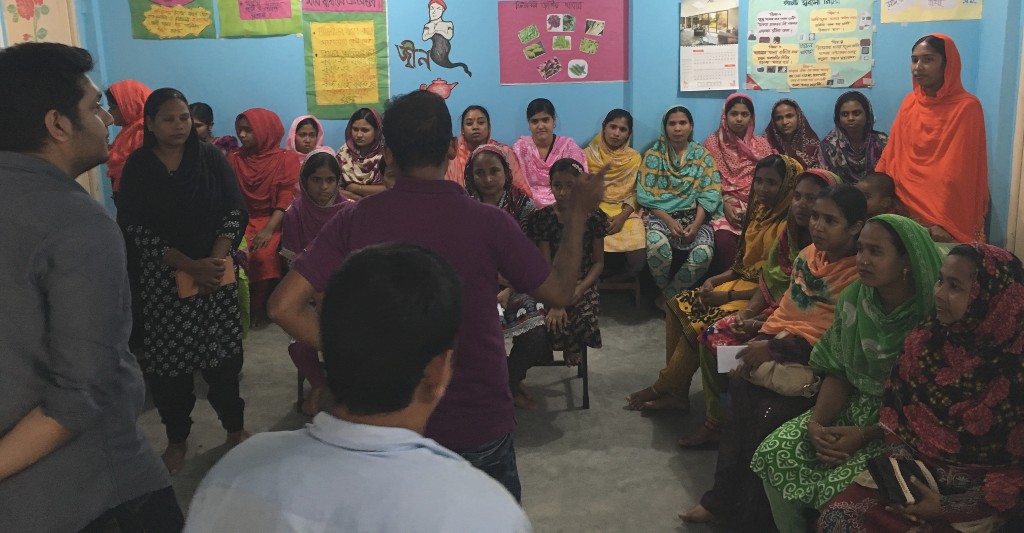 On Our Radar’s storytelling workshop with garment workers in Dhaka.

We trained workers to interview each other and report back their stories. The group sorted through insights collectively to see how their personal experiences connected to the life of a typical worker, and selected those stories that they thought needed to be told.

Some reveal the lives of rebellious activists fighting for better labour conditions; while for others, factory work has offered opportunities, security and independence.

The result is a powerful series of six short films that take us beyond the stereotypes to reveal surprising and intimate stories about factory workers’ hardships, hopes and dreams.

These are their stories.

This is a project by On Our Radar for New Internationalist, made possible thanks to funding from the European Journalism Centre (EJC), Innovation in Development Reporting (IDR)

All of the team at AWAJ foundation, Olivia Windham Stewart and Florence Myles.